Intra-erythrocytic parasites responsible for equine (Theileria equi and Babesia caballi), bovine (B. bovis, B. divergens, and B. bigemina) and canine (B. canis and B. gibsoni) piroplasmosis are obligate intra-erythrocytic protozoans transmitted by tick vectors. Substrate Slides are prepared with infected erythrocytes propagated in vitro, where the merozoites are visible as compact inclusions by IFA staining. Improved techniques developed for in vitro propagation of these parasites have increased both sensitivity and specificity of these IFA assays.

In working with Babesia microti in culture we received some Red Fox blood from a roadkill animal that was parasitemic. We finally got rid of the contaminant bacteria and found the Babesia ("Spanish Dog" or Babesia vulpes) growing in the co-culture system we built for B. microti. The piroplasm is small, somewhat pleomorphic, and looks like pictures seen in published reports. As also described, however, it cross-reacts strongly with Babesia microti and, thus, adds little to diagnostic sensitivity. Of course, if researchers are interested in working with this canine pathogen in culture, we love to collaborate. 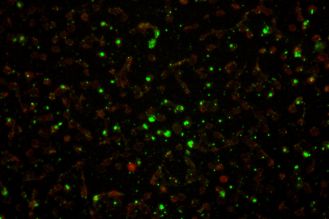